Back before I bought my little cottage in the forest, I used to live in a sketchy area of Baltimore down by the docks, full of pirates and wharf rats. (This sounds like the beginning of a fairy tale, but isn’t really.)

A major feature of my morning commute, back then, was all these big, colorful shipping containers, haphazardly piled up in freight yards (?) like a giant kid was playing with blocks.

I never thought much about these big boxes one way or the other, until Garrett Baldwin told me I could make a lot of money off them.

“Infinite returns,” was his phrase, in fact.

Garrett, our resident commodities nerd, has a way of making you take a second look at things you’ve never thought twice about before – and today, it’s dry bulk shipping.

Much like “the house that Jack built,” it’s “the boxes that carry the iron,” or the coal, grain, lumber, and everything else we need. And those big containers are apparently big business right now.

First, Pick Up An Easy Nickel Slots Play in BDRY…

Garrett’s got a couple of “box” plays for you today – and he wants to emphasize that they’re both momentum-based.

Back when we all spent more time in the office, Garrett spent a lot of that time in the basement with our research team, building a complex indicator that measured two things: value and momentum. (I remember a lot of yelling coming from the lower floors of our office during this period.)

If you’re a depth trader, you’ll probably connect more intensely with the “value” part of Garrett’s soul: finding companies that are great long-term buys based on fundamentals. Flex traders may be more interested in shorter-term momentum moves like this one.

Garrett’s first recommendation — Breakwave Dry Bulk Shipping ETF
(NYSEARCA: BDRY) is the basket that carries the boxes, if you will. It’s the benchmark measure of commodity shipping costs that recently notched an 11-year high. 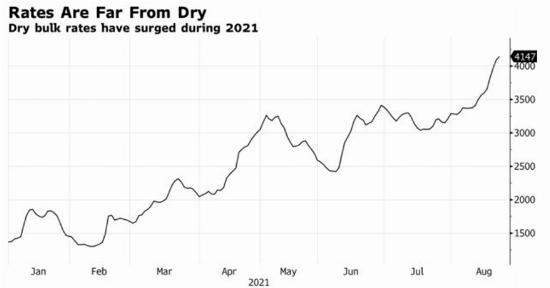 Source: Bloomberg
(I guess Bloomberg can do whatever they want, but I know I have been repeatedly reprimanded about putting corny puns in headlines, BUT WHATEVER.)

“Around the globe, dry bulk rates continue to rally, and there isn’t much here that wants to slow it down,” Garrett says. The overall dry bulk trade is projected to surge 4.2% this year as Covid shipping restrictions lift, and an additional 1.7% next year.

“Commodity prices are rising and because of a shortage of everything, supply chains are paying more to guarantee delivery on a tight amount of goods and products,” he added.

(Actually – since this was over Slack – he sent me a typo: “good sand products.” I spent a good minute or two trying to figure out which major commodity market included sand.)

As good as these boxes look right now, Garrett wanted to emphasize that they’re still nowhere near the levels we saw in 2007-08. The all-time high for the Baltic Dry Index – another bulk shipping ETF – was nearly three times its current price back in May 2008. So there’s room to run.

Source: American Shipper
Garrett’s “Nickel Slots” play on BDRY is pretty straightforward. “Sadly, there’s no option chain,” he said (Rats, I was excited for a minute.) “Buy it with a 7% trailing stop.”

(Speaking of straight stock plays, if you picked up Garrett’s Aug. 25 PLOW recommendation, it’s now up to $38 from $33, so keep on…truckin.)

Here’s what to do with BDRY:

…And Then Grab A Synthetic Long on SBLK for Infinite Returns

Before you get too het up about the “infinite returns” here, keep in mind that this is a Dollar Slots play for a reason. “With infinite returns come significant risks.” (Sorry, my kid has been watching a lot of Spiderman recently.)

The stock in question here is Star Bulk Carriers Corp. (NASDAQ: SBLK), a dry bulk transportation company which literally ships things, in ships. (They’re based in Greece.) It’s a $2.33 billion company recently upgraded by Zacks, and trading a little below its twelve-month high of $25.24. 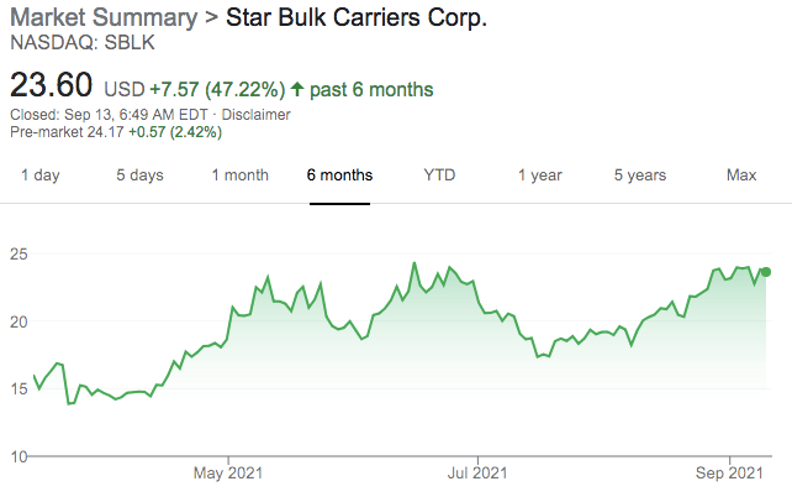 The strategy Garrett wants to use is a “synthetic long,” which simulates a long stock position at a lesser cost, using options. Basically, you’ll sell a put and buy a call (different strike prices, same expiration) at the same time.

“The goal is to buy back the put for less and sell the call for more,” Garrett says. “The nature of selling the put and buying the call has a leverage effect.”

Obviously, this is risky since you’re doing a cash secured put in the process – you have to have enough margin to buy the stock if, for some reason, the whole thing goes “kaput.” And since this isn’t necessarily a stock you want to buy and hold long-term (just a momentum play), it’s not that same “gotcha” feeling as having a stock put to you that you secretly want to own.

Here’s a quick rundown of the stats we see for this play on our magic scanner. (OK, OK, it’s optionsprofitcalculator.com).

“You’ll want to explain that this is doing two things,” Garrett reiterated. “One, it’s a synthetic trade. Two, it’s a cash secured put as well. So, you’ll take delivery if this falls under $23. The long case is there.”

That 63% probability of profit means this is a two out of three bet on dry bulk prices rising – so, better than a coin flip. (If it influences you at all, though, Deutsche Bank, which recently doubled down on their “Buy” rating on this stock, has a $40 price target on this one.)

It’s also worthwhile noting that the “maximum risk” here is only if SBLK goes to literal zero, which is astronomically unlikely to happen.

Your mission, should you choose to accept it, is below:

I’m a bit hesitant to keep linking to our “open portfolio” page until we get the proper tracking software running, but these trades, like all our trades, are listed there.

Also — hop into the chat over at Money Morning LIVE and bother Garrett about shipping containers anytime you like.

I’m off to engage with another industry I’ve never given a second thought to until today – doorknobs and deadbolts. Apparently, every time you buy a new house you have to change all the knobs and locks so Goldilocks doesn’t get in. I should have bought Lowe’s Companies Inc (NYSE: LOW) a long time ago.

In keeping with today’s slightly fairytale theme, I’m going to try to conjure Kenny Glick – known in these parts as The Warlock – for his first ever free play in Trading Today, tomorrow.