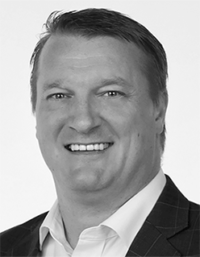 He also spent more than a decade as a corporate spy and still has his ear to the ground in Washington and on Wall Street, giving him a critical edge in his trading. He’s conducted risk-assessment projects for clients in 27 countries and consulted on policy and financial operations for some of the nation’s largest financial institutions, including a $1.5 trillion credit fund and a $43 billion credit and auto loan giant, as well as two of the largest Wall Street banks by assets under management.

In addition to his lead role at the Flashpoint Trader, you can catch him on the Money Morning LIVE show, discussing the hottest stock and economic news and dishing out timely trade ideas with other Money Map experts and special guests.

Garrett Baldwin is using his decade-plus of experience in the financial world, as well as his wealth of economic and corporate insight, to deliver Flashpoint Trader every single morning. He’s taking the pulse of both Wall Street and Main Street, and turning it into actionable trade ideas, designed to profit in any market environment! Whether the backdrop calls for a buy & hold stock trade or an options strategy of some kind, Garrett is dishing out the goods LIVE each morning, and teaching World’s Biggest Trade members all the hows and whys. Plus, every Monday Garrett delivers his Weekly Intelligence Report LIVE, so traders know exactly what’s on his radar and what to watch each week. Learn More

Garrett Baldwin is using his decade-plus of experience in the financial world, as well as his wealth of economic and corporate insight, to anticipate and profit off of market turns with Hyper Momentum Trader. His proprietary formula for momentum has put him at the forefront of predicting market turns, and he’s batting 100% so far anticipating all 15 significant market turns that occurred in 2022, and he plans to do the same in 2023. Learn More

The World’s Biggest Indicator – Momentum, goes LIVE at 12:30 pm est, Monday thru Friday, to serve as your essential guide for market direction. Join Executive Producer and Anomaly Trading expert Garrett Baldwin daily to ensure you are not caught on the wrong side of momentum. Enter your email to receive Garrett’s free eletter Midday Momentum:

"Excellent insight from a former market maker at CBOE." — Robert Eastway
"275% in one day with $250 investment. I'm regaining the losses I made this year thanks to Mark!" — Daniel Bryant
Read All Reviews