Liz here, coming up with creative swear words since my 4-year-old was old enough to hear me in utero. Fuddruckers! Butterfingers! Oh posh!

Garrett himself had just three words for me. I unfairly slacked him at 6pm on a Sunday night, asking him for a trade, and he responded, “DECK reversion momentum.”

That led me down a fascinating research rabbit hole that (you guessed it) involved supply chain shenanigans in Vietnam.

This is, for the record, the perfect shoe for never leaving the house in. And yet, here’s Megan Fox wearing them in public, photo courtesy of Entertainment Tonight. She spent a whopping $60 of her Transformers cut on these, if you find yourself wanting a pair.

To be fair, though, my last options pick made you well north of 50% if you got in where I suggested, so you’ll probably make out OK here.

Deckers Outdoor Corp (NYSE: DECK) is a $10.1B shoe giant with 10.1 billion ways to be comfortable and ugly. (I’m sorry, I’m just salty that since the pandemic started, I have no place to wear high heels anymore.)

DECK is the parent company for popular running shoes (see: HOKA) and fluffin’ hideous boots and slippers (see: Fluff Yeah, and all other offerings from UGG). They also sell a variety of other relaxed sport shoe and sandal brands like Teva, Sanuk, and Koolaburra.

And – lucky for them – since Covid started, everyone’s either taken up running and long solitary walks, or given up by defeat to sit by the fire in fuzzy slippers. The demand for running shoes is high and growing, with the global athletic footwear market expected to grow by 3.3% over the next few years.

And as for the fluffy shoe market, fudgin’ forgetaboutit. During the pandemic, UGGs snatched the #2 spot in dollar volume growth for “non-active” shoe brands. 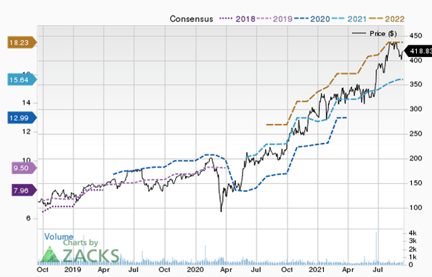 And yet – take a look at DECK over the past month. 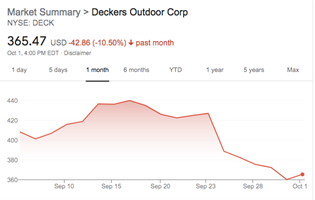 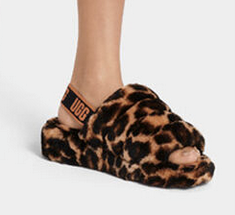 Well, an equally instructive question is – what’s happened to NIKE? And Adidas? And a whole closet-full of other well-regarded ugly shoe stocks over the past month. 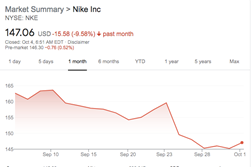 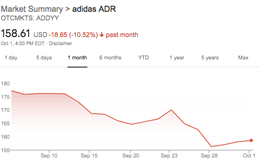 Vietnam, that’s what. I love the smell of napalm in the morning.

Last week, Nike reported disappointing earnings, with revised expectations of mid-single-digit growth, instead of low double-digits. That just bummed out everyone else in the sneaker and comfortable shoe space, hence the parallel drops.

Nike, sadly, had good reason for concern over supply chain bottlenecks: 50% of its footwear and 30% of its apparel are produced in Vietnam factories, and huge swathes of those factories got shut down in mid-July over rising Covid concerns.

A lot of other U.S. shoe companies – like DECK – have considerable Vietnam exposure, and the shutdowns are spooking everyone. (Adidas, for instance, said that Vietnam delays have already lost them $600 million in sales this year.)

The pandemic demand for ugly shoes is as strong as ever – it’s just that there’s no place to make them.

Understandably, global brands worldwide are starting to talk about pulling out of Vietnam. (Yes, Andrea, I said “pull out” – please control yourself.)

Lakeland Industries said on Sept. 9 that they’re actually hiring new executives to help them move out of Vietnam and back into China “in a matter of weeks.” Hooker Furniture (yes, Andrea, I said “hooker”) has been stealthily re-establishing itself in China for quite some time.

And this is why the recent pullback in shoe stocks is just that, a pullback — Vietnam is spooked.

So spooked, in fact, that they’re reopening.

On Oct. 1 (a red-letter day for me, since that was the first day my new mortgage came due)… Vietnam’s main commercial hub, Ho Chi Minh City, lifted its most stringent coronavirus restrictions, allowing activity to resume at industrial parks, malls, construction projects, and other locations.

Once the main manufacturing hub relaxes restrictions, other cities will follow suit.

According to BTIG analyst Camilo Lyon, “Once the factories reopen, we expect a gradual build back up to full production capacity reaching 50% through year-end and then fully ramping back to 100% sometime in 2022.”

That reopening should nudge DECK – a fundamentally strong business — right back up where it should be.

Die Hard IS a Christmas movie. Don’t even go there.

Garrett sent me three words for this article, but two of them – “reversion” and “momentum” — are where all the money is.

A couple of years ago, he explained it this way:

“We want to focus on the stocks that have the best chance of experiencing a reversion to the mean as the markets rebalance.

“What this means is that we’re focusing on stocks that are oversold in the market or their metrics simply do not match up with their counterparts. In most cases, there are few reasons why the stocks are trading at the levels they are except for Wall Street sentiment.

“When we’re in a momentum market, we find ourselves caught in a moment where we’re out of sync with the irrationality of everyone else. This happens from time to time. And while numbers can look ugly when you see red, this is all very deceiving.

“In this scenario, basic math says that we will see a reversion to the mean soon. We simply have to be patient no matter how white our knuckles might turn for a short period of time. I know that’s difficult to do, but I’ve lived through this before – and in the end we’ve come out on top.”

According to one of Garrett’s “frequent flier” momentum oscillator indicators, the Relative Strength Index (RSI), DECK is definitely oversold. It’s down at 28 right now – the “oversold” ticker hits at 30 or below, while “overbought” is 70 or above. 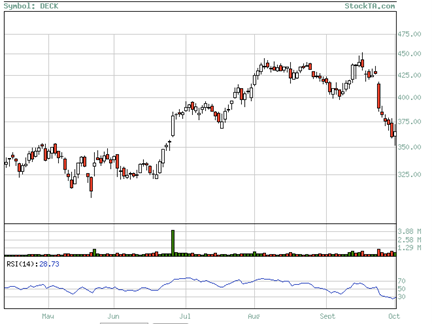 We’re looking for a “reversion” here, which is a tilt back up to longer-term levels where the stock is most comfortable.

DECK kept kissing $435-$440 and going back for more this summer, and there’s no reason that won’t happen again – but let’s be conservative.

We’ll also build ourselves in some time to encompass Nov. 4 earnings, which, as discussed above, are expected to be pretty solid. 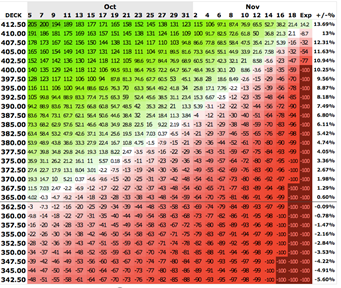 I now present to you some – unfortunately – ridiculously expensive options. (Options were, literally, limited. Wienershnitzel.) These are solidly Dollar Slots, but they’re liquid and have a considerable amount of time value and profit potential built in.

If you’d rather play Nickel Slots, I suggest grabbing some far cheaper calls on Nike (NKE). Especially with the supply bottlenecks loosening, there’s no reason they won’t pop back up to their recent $159, though that’s still a long way to go beneath their yearly highs.

(In case you’re wondering, despite all my creative swear words, it was still no use. The 4-year-old matter-of-factly informed me the other day that we needed to take the “f***-it road.” “What road is that?” I asked. “The road dad doesn’t like to drive on,” he explained.)