Liz here, full of irrational hatred. (It’s Monday so it’s a good day for it! Also, I was initially going to tee up a Mark Sebastian trade, but he is out of town for Columbus Day, which coincides with his anniversary. WHATEVER, Mark.)

Plus, my kid, who is also out of school for Columbus Day, just whacked me on the head with a sword. Future colonists unite.

CJ’s stepping in with another lucrative oil patch trade today. (Congratulations on closing out a couple of triple-digit oil wins already). But when the first words out of his mouth were “Pittsburgh,” I knew we were going to have some issues.

I don’t know why I actually hate Pittsburgh so much. When I first moved to Baltimore many years ago, my first husband, Sean, told me in no uncertain terms that we despised Pittsburgh, the Steelers, and anything yellow and black. If I wanted to continue the relationship, I too had to denounce the “Squealers” and all their ways.

I dutifully did so, but I refused to throw out the yellow and black afghan that I bought at Love’s Travel Stop. It was almost a bridge too far for the marriage, but we worked through it by the time of his death.

ANYWAY, CJ’s latest natural gas play – CNX Resources Corp (NYSE: CNX) — is based in Pittsburgh, a.k.a. the very pitts of hell. He sees the options headed up 70% in the next two weeks, and much as I loathe the “Terrible Towel,” I can’t say no to that. Sorry, Sean.

Plus, he just sent it to me, giving me barely enough time to write anything before my deadline – so there was no time for a do-over.

CJ Gets Into CNX Technicals (And Honestly They’re Pretty Good)

As I said before, I’ll let CJ explain this largely in his own words – first, of course, because I’m too disgusted, and second, because we are about 15 minutes from press time and I don’t have time for a lot of extra editorial.

CJ, as you know, is a dyed-in-the-wool quant, and depth traders appreciate how closely he follows technicals. (He applies that same attention to detail to finding OTC penny stocks over at Penny Hawk, so make sure you’re on that list.)

“We’re trading CNX Resources as part of the bullish energy trade,” CJ says. “The stock is trading in a bullish volatility trend as energy prices continue to rage higher.

“My Night Traders traded a position in this last month and I’ve referred to it often as one of my active Side Trades.”

I asked CJ to send me a serial killer chart, with his delightfully spidery handwriting, but all I got was this normal chart. Yet another reason to be angry today. 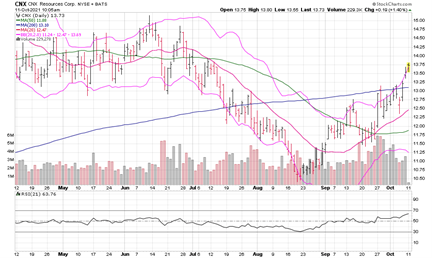 Here’s CJ, unadulterated, on what he sees here:

Shares took out three significant technical prices last week that are fueling the current move, which is targeting $15.00.

First, the stock broke above resistance at the round-numbered $13 price. We had seen some resistance on the initial rally to this price meaning a break above would bring another round of buyers into the energy stock.
–
Next, CNX shares broke above their 200-day moving average. This is the first bullish break above this technical since the stock made a bearish decline below the same trendline in July.
–
CNX shares are in the process of breaking above their top Bollinger Band. This move will increase or maintain the upside volatility in CNX prices.
–
Both the 20- and 50-day moving averages are in a bullish pattern, which indicates that the stock is likely to maintain its short-term aggressive trend over the next 4-6 weeks.

That shakes out into a nickel slots (straight stock play) and dollar slots (options) for us.

How to Get the Booty

(I just remembered that the Pirates are also a Pittsburgh team. I assume I don’t like them either.)

To be honest, CJ’s Dollar Slots are so cheap they’re almost shading into Nickel territory (I know which play I’d pick, if I weren’t so upset at this whole scenario).

There, I got through that without actually vomiting!

My child just ran his scooter directly into my computer, in another act of aggressive colonization, so today’s mailing will be cut a little short. But I’ll be back tomorrow with another less offensive oil play from Garrett.