Liz here, feeling GUILTY. I have been CAUGHT. Once you’re married, there is literally no place to hide, you have someone up in your business at ALL hours of the day, and my husband just discovered one of my most shameful secrets. I had concealed this throughout our dating and engagement, but my sins have finally caught up with me.

It’s honestly so shameful I can’t bring myself to write it here. I have to bury it on the website.

In stark contrast to me, CJ is having a great, not-embarrassing-at-all day. First in order of business, his DLR calls are now up over 80% (I’m seeing 88%), so I want you to take off half of those profits now.

(Also, sign up for Penny Hawk while you’re at it.)

Here’s what to do.

We’ll leave the rest of these to run closer to the April expiration date – CJ sees internet infrastructure as a longer-term play, which is why we own the stock, too.

Second in order of business, CJ’s also got a brand-new semiconductor play teed up (we’ve already played some ball in this sector, thanks to AK). He says, “Last week on Money Morning LIVE, I reiterated the case that the Semis were set to remain the relative strength leader given the thematic backdrop of the semi shortage.” And he’s pinpointed an under-the-radar semi stock that everyone forgot about during NVDA’s post-Black-Friday rebound.

Plus, he tells me he’ll send me a serial killer chart by press time, which makes me feel a little bit better about my terrible life choices.

Here’s a little more than you probably wanted to know…

Here’s What I Did

I hesitate to even write this, but – since I bought my Kia Soul in 2019, shortly before I met my husband… I have not had it serviced….once. Yes, Andrea, I said serviced… shut up.

I have not taken it to the dealership to get the oil changed. I have not had the tires rotated or done any of the random things that you are supposed to do with air and water and fluid and pressure and electricity and smoke.

I’ve just sort of kept driving it and hoping for the best, as one light or another lit up on the dashboard like a Christmas tree (festive!)

Over Thanksgiving weekend, I was finally caught out.

My husband drove the Kia down to my parents’ house, his first extended trip behind the wheel of that vehicle. Shortly after we pulled out of the driveway, he looked at me and said in QUIET tones of DEATH, “When was the last time you took this thing to the dealership?”

“Well, I was busy taking you food while you were in jail for the past few years.” (My husband is not incarcerated, he is a corrections officer, but I like freaking people out for a hot minute.)

As I write, he is on the phone making the first available appointment for me – and discovering that not only have I never done all the routine things I was supposed to do, but also, since I bought the vehicle there have been four (4) recalls on semi-important parts that essentially, mean I have been merrily driving a death trap throughout our relationship.

I’m torn between being grateful that he rescued me and furious that he caught me. Marriage is hard. They don’t tell you these things when you’re saying yes to the dress.

ANYWAY, I’ll shut up now and let CJ tell you about his play on Analog Devices, Inc.

(NASDAQ: ADI), a Massachusetts-based chipmaker that just scored a nice earnings beat, with earnings up 20% and sales up 53% year-over-year (wicked!).

CJ says, putting everything in present tense to make it more urgent, “ADI beats estimates by 2.4% last Tuesday, but nobody is looking, as the market is completely focused on NVDA.”

ADI’s in a little pullback right now, but look at the bigger picture: 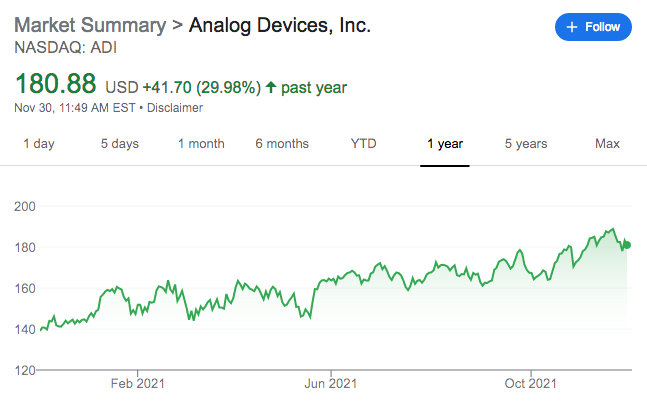 In case you’re curious, Bank of America just reiterated their “buy” rating on NVDA, saying that the computer chip shortage isn’t going away anytime soon. In their words, “retail inventories are still at or near record low levels with additional stock sold through within hours of arrival.”

I have not been contributing to this shortage in any way, since I have apparently missed the last three (3) software updates in my vehicle, FYI.

CJ picks up the technicals saga of ADI, still in present tense:

ADI shakes out on selling to test round-numbered support at $180. At that point my technical screens pick it up on Wednesday’s close.

Then Friday hits and nobody remembers what ADI did just a few trading days ago.

Pow, it trades to near-support at its bullish 50-day moving average on lighter-than-average volume… important because the rest of the market is getting hit with heavy volume, but not the Semis.

Monday comes, and traders are picking up the pieces to get set for a short-term bounce, resulting in ADI seeing a pop in buying volume AND a crack at the “Trader’s Trendline” (AKA 20-day), which is also in a bullish trend.

Stock is now set to run back to its $192 highs on buying volume and follow-through on the break above the 20-day.

(Liz again: I’ve left a blank spot here for CJ’s serial killer chart, which he promised to get to me after his 11:30 slot on Money Morning LIVE. Right now, it’s looking dicey whether I get it by press time. If not, I’ll send it over first thing tomorrow morning.)

CJ’s got three ways to play this – a fact he seemed rather proud of in Slack. “We’re long the stock and using a vertical call spread to target a rally to $195 where the stock is likely to be capped,” he said. “I like the way this plays out.”

Nickel Slots #2: A call spread to play the short-term swing:

And finally, for Dollar Slots — play the longer-term momentum to the upside with March calls (manage the position using technicals on the underlying).

I’ll be back with a new AK play tomorrow once I have RECOVERED FROM MY SHAME. And you can expect me to be writing my December 6th issue from the dealership, where I now apparently have to sit all morning as my death trap vehicle is reanimated.