Liz here with good news! I’m officially licensed to wed. Well, that, and you’re also making a nice chunk of change today, thanks to Mark and Garrett.

Garrett’s got a brand-new bank trade for us today, Mark’s last bank rec is up 83%, and oh yes, you can and should take home triple digits on XOM this afternoon.

I’m not doing a registry, but if you could find it in your heart to fund my venue shuttle bus with a portion of your winnings, I’d be much obliged. It literally costs $1000 to rent a school bus for the afternoon. I didn’t even bother pricing the limo.

MAYBE I COULD HAVE, if I was legally allowed to be IN THESE TRADES, but I digress.

Anyway, first things first – back when Mark first introduced us to the oil patch kids, you cashed out 50% on the first leg of XOM. I suggested you let the second half ride until closer to Oct. 29 earnings – and lo and behold, the rest of the position is now up 172% as I write.

Let’s not look a gift deviled egg platter in the mouth. (Actually, that was the main reason I didn’t do a registry – I just didn’t want a lot of weird-a** items.) Here’s how to grab that second, even bigger gain on XOM.

My Wedding Is Not A Giant Cash Grab, But This Is

Anyway, let’s close out XOM for a second leg of gains, twice as big as the first leg. (That sounds like gout, to be honest.)

While we’re on the subject of Mark, BAC keeps climbing ever closer to $50, just as he profanely predicted. 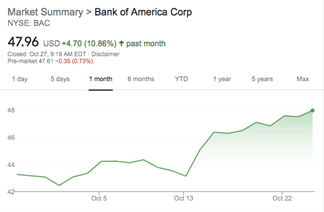 Any time you feel like playing chicken, feel free to sell some or all – but if I WERE ALLOWED TO HAVE skin in this game, I’d be waiting for the triple-digit hit on this one.

And – while we’re on the subject of banks – let’s pick up Garrett’s latest, a fast-moving Fed deadline play on Citigroup Inc (NYSE: C).

Over my career, I’ve had the misfortune to listen to many, many old men talk about the Fed. Some of them were obsessed to the point of madness (and indeed, Marty Fartman fell off a bridge while ranting about Janet Yellen and was never heard from again).

One topic, though, that rarely comes up in connection with the Federal Reserve is “speed.” They move at a glacial pace while adjusting our massively creaking monetary apparatus by fractional basis points at interminable meetings.

One of those meetings is set to happen next week, on November 2, and the Fed (which we know, because the meetings are preceded by constant, slow information drips like water wearing off the walls of a cave) plans to announce that they’ll start “tapering” by January.

It may even happen by mid-November (buzzword: HAWKISH!)

In a nutshell, the central bank is going to cut back on the massive bond purchases that have kept our economy afloat during the pandemic. Eventually, by mid-2022, they plan to stop buying altogether.

The Fed has been forcibly injecting billions of dollars into the economy throughout Covid (I won’t compare this to vaccination, I won’t I won’t I won’t), and, obviously, all that liquidity has been good for big banks….

Bank of America, Morgan Stanley, JP Morgan Chase & Co, Goldman Sachs, and Citigroup (today’s star) made an extra $51B in trading revenues during Covid, compared to prior years. The KBW bank index has risen 40% over against the S&P’s 19% year-to-date. So that’s all been nice, so far.

You might think that Fed tapering (less liquidity) would be a bad thing for banks, but as my child sings, “if you can’t figure it out the first time, don’t cry, just try again.” (I wish he would take his own advice as we had a terrible meltdown about socks this morning.)

Less liquidity is going to cause more volatility, and that means lots of new business for big banks with big trading businesses as traders remix their portfolios.

According to Citigroup Chief Financial Officer Mark Mason, “As investors look to position based on that volatility, that creates an opportunity for us to make markets for them. And obviously that would lend itself to improved performance.” 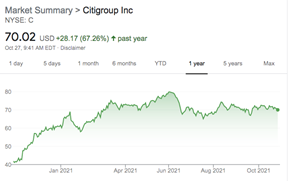 As always, Garrett settles in here for a well-reasoned depth trade. He wants us to get into Citi before the Fed officially announces their tapering plans next week – so we can benefit from some of that volatility-driven trading revenue in Q4.

Garrett’s expectations – unlike his penchant for multiple email addresses – are not unreasonable. “Wall Street loves C – analysts have a $90 price target. I just need it to get to like $74,” he says.

“With the Federal Reserve meeting next week, I’d look to trade this one of two ways. One – selling puts to open a position on the bank, out to January when tapering will start. Two – a vertical call spread.”

That put-selling position is going to be “Dollar Slots,” given its unhedged nature. Nickel Slots people may resonate more with the spread. (If the stock gets even to $73 by the end of November, you’ll see a 51.7% gain on the spread, which ain’t bad at all.)

Nickel Slots peeps, here’s what to do.

And here’s Dollar Slots – a tad expensive, but then, you knew what you were getting into. UNLIKE WHAT HAS HAPPENED with my caterer. “Here’s your extra $945 bill for incidentals.”

I’ll be back tomorrow with a fresh AK play, and back on Friday with Money Calendar Friday, and then I will be gone all next week getting married – brace yourselves.

Do not write, do not call, and please do not get me an off-brand panini maker.