Liz here, looking forward to the Money Map Press Christmas party, where I can now bring, and show off, MY HUSBAND. (As I say, the all caps will wear off in about a week.)

Our Christmas parties here at MMP are legendary. One year there were acrobats. One year we had live penguins just sitting on the tables like “wassup dude.” About a month before the event, we get an official “dress registry” so we can make sure no one is wearing the same outfit (le horror).

Last year, in the height of the pandemic, we had a Zoom trivia night instead of a party. We’re all just pretending it never happened.

(I have a friend called Keith, by the way, whose company is doing a Zoom party again this year. It’s a cookie-baking and soul-sharing session, for all levels of management at once, hosted by an unlicensed hippie therapist. I told him that if I wasn’t mentally ill before I attended that event, I would be afterwards.)

Since we’re on the subject of parties, it’s a good time to take home 60% or so on Tom’s over-the-hill party play, KRE…

The markets are buckling a little bit today under the weight of higher-than-expected inflation data, and I’d like us to lock in some profits on the “Dollar Slots” portion of our KRE trade (an unhedged call). I hop out early like this in Vegas, too, and that, my friends, is why I own an expensive exercise machine that I have yet to use.

The “Nickel Slots” call spread is also up 60% or so, but since we’ve got some built-in protection on that one, let’s go ahead and let it ride until closer to the December 3 expiration.

(NASDAQ: PTON). You’ll be in and out of this baby in less than a week.

Christmas Came a Tad Early This Year, I Guess

Here’s what to do for that 60-ish percent. Thanks, Tom! And thanks, Rachelle, Tom’s right-hand woman, for organizing that great bachelorette party.

And please leave your KRE call spread alone for now. If the current 60% erodes over the next few days, I’ll send you another exit.

Oh, by the way – we’re currently working on a bells-and-whistles, easily accessible Trading Today site, but in the meantime, here’s our live, working portfolio to tide you over. Make sure you’re regularly tracking your trades here – you may score a juicy exit before I even get to it.

If you think back a little bit, Peloton sort of had an anti-Christmas-party a couple of years back, with an infamous 2019 holiday commercial that made it look as though this poor woman’s husband was coercing her into fitness. 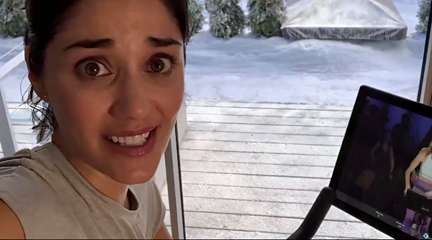 Mostly, it was the fault of the actress’s eyebrows, which made her seem subconsciously pained even while reciting happy lines.

That didn’t really seem to hurt the bottom line, though – with the company recording a 172% sales surge during the pandemic, while everyone was stuck at home being browbeaten into indoor exercise by that evil spouse, Covid-19. In fact, PTON scored its (so far) only profitable quarters during this whole thing.

I’d like to state for the record here that, though I did buy a weird, expensive exercise machine — The Dream Butt — myself during the pandemic, I used it exactly twice and in no way did my then-fiancé, now HUSBAND, coerce me.

As vaccines roll out and the world reopens, though, PTON seems to have hit a wall. Well, hit a wall and then fallen off a cliff. 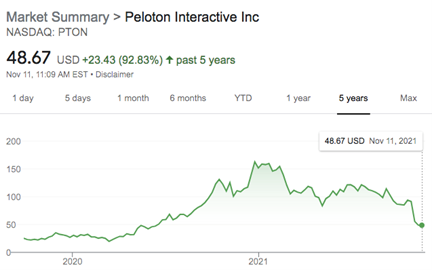 Peloton reported dismal earnings last week, got downgraded by Argus, implemented a massive hiring freeze, and are sitting at a $15.4B market cap down from $45B at the start of the year. The company doesn’t expect to be profitable again until 2023.

Oh, yes, and they recently had to recall a bunch of their treadmills after one of them killed someone.

All that bad news makes me want to short PTON. And in fact, I’m going to. Hang on half a minute.

But AK’s not! The beauty of AK’s SCAN signals is that they don’t care about the fundamentals or longer-term outlook of the company. They just watch for unusual options activity, confirm it with the Ichimoku cloud, and boom.

Short-term, often day-trading style gains that are all “flex,” no “depth.”

AK, our International Man of Mystery, spotted a big insider call buyer on PTON yesterday – and he sees a fast-moving pop in the stock that should take place inside a week, and net you 100%.

“We have seen huge call buyers in PTON for next week and I like the reward-to-risk of this,” he emailed me, probably from Finland.

So here’s AK’s “Short Ride in a Fast Machine” (that is an actual piece of music that I was privileged to play in high school orchestra. I was a very bad violinist.) It’s his trademark cheap calls, which I love – Nickel Slots, of course.

Now, I myself see PTON as a longer-term short, for the obvious reason that we have all been stuck inside staring at a screen for way too long. THAT IS WHY WE ARE NOT HAVING A ZOOM CHRISTMAS PARTY THIS YEAR, KEITH. In fact, I’d be willing to bet you that before Christmas, PTON‘s going to trickle back down from its current $48 to $45.

These are Dollar Slots, both because they are slightly more expensive and also, because I don’t have a proprietary scanner, just COMMON SENSE.

I’m off to use the exercise machine so that I can fit into my dress for the “dress registry,” so that I can leave the house, so I can go to more stores in person instead of online. It occurs to me that all this is just a massive, circular plot to force us to spend money.

I’m very upset about this, but the only way you can tell is by looking at my eyebrows. I’m telegraphing you.

Back tomorrow with a fresh Money Calendar Friday play from Tom!