I had to get up top with the big mover first, but I’ve got a fascinating longer-term profit story for you this afternoon. Courtesy of a very special guest…Tim Melvin, who baffled and delighted audiences last week when he appeared on Money Morning LIVE.

Tim isn’t the 75-year-old in the headline. I’m actually not sure how old he is – he’s got sort of an ageless vampire-like quality to him, probably because he subsists exclusively on a two-item diet: steak and whiskey. Yes, that is right.

In case you missed him on Money Morning LIVE, I’ve included an illustration of Tim with his steak and whiskey. (Apologies for the ink smudges, I’m a leftie.) 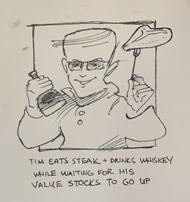 Tim is also Garrett’s father-in-law (see: big, dysfunctional family), and he’s the “power behind the throne” on a lot of our research-heavy systems here at Money Map Press. Maybe most important, though, he’s a value stock aficionado. (Depth traders worldwide just had a heart attack of delight.)

Tim subscribes to the Warren Buffett school of thinking: buy and hold….and hold and hold and hold. (I’ve spent a lot of time lately watching paint dry at my new house – it’s pretty much the same thing.)

The joke used to be that Tim was the only guy here with a perfect track record… because he never closed out any trades.

Today’s a little different, though. Tim’s got a “buy and hold” recommendation that has to go up pretty quickly, because a 75-year-old bank owner called Vernon Hill has to sell his bank to a larger buyer before he retires. If you get in now, you could double your money after the acquisition.

Trouble is, we don’t know exactly when that will be. But hey – the guy’s 75 and can’t kick the can down the road too much longer.

“You can make a lot of money on M&A (mergers and acquisitions) in the bank space,” Tim said. “I’d describe it as a high-return complement to your trading activities.” If that doesn’t sound exciting to you, I’ll take a big shot of whiskey and watch more paint dry.

Why Tim’s Hot on Banks – And You Should Be Too

Tim has always been, for lack of a better word to describe it, a bank nerd. I went into my email from about 4 years ago and found a massive love letter he wrote to small banks. He loves buying them, watching them get bought, watching them increase in value, and watching, and watching. It’s like candy to him.

Or candy corns to me. (This is my FAVORITE time of year.)

“I have made an enormous amount of money in the small banks,” Tim said in this long email. “I have had clients and friends who retired because they invested in a bundle of small banks and then experienced multiple takeovers in their portfolio giving them huge gains. I also know plenty of bank executives who invested heavily in the shares of their bank and became what I like to call filthy, dirty, stinking rich.”

Tim’s preferred strategy for buying little banks is to locate banks that have clean balance sheets with lots of capital and clean loan portfolios and buy them at a discount to book value (all their assets minus all their liabilities. Think of it as net worth).

Then – as previously explained – he drinks whiskey and eats steak.

“I just own them until someone else buys them or they trade at two times book value,” he says. “Unless the people running the bank are idiots, the net worth usually goes up pretty much every year, so I rarely sell a bank for less than twice what I paid for my shares.”

He calls this strategy “buy right and do nothing,” putting me in mind of a fidget-spinner desk gadget we used to call the “Kentucky Do-Nothing.”

M&A (big companies buying up little companies – and in particular, big banks buying up little banks) is hot this year. In the first eight months of 2021, companies worldwide have made $3.6 trillion worth of deals, the highest figure since at least 1995. Goldman Sachs alone has made over $3 billion in deal advisory fees over the past three quarters.

Specifically, the number of banking M&A deals is higher than ever: 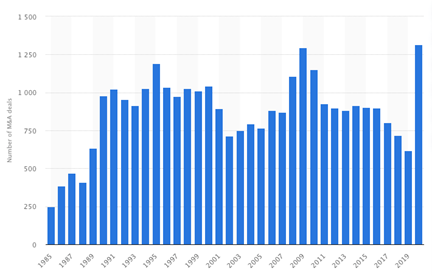 The Pac-Man-like phenomenon of little banks getting eaten by bigger banks can be a little disorienting. My first husband used a bank called “St. Casimir’s” – it was a little square brick bank that had been sitting in the neighborhood his entire life. When I went there while settling his estate, I discovered that it was gone – a bigger bank called “Bay Vanguard” had bought it lock, stock, and barrel.

While driving an irritatingly long distance to Bay Vanguard, I thought to myself, “Tim Melvin strikes again.” I know he is not personally responsible for M&A in the bank space, but darn if it doesn’t seem like it.

“The bank industry is healthy right now,” Tim said. “Corona could have wiped out the industry, but it didn’t. Government loans kept people in homes, kept businesses open – and the industry came through in much better shape. Loan quality is high, and capital levels are the highest they’ve ever been.”

In fact, the Federal Reserve just finished running a series of Dodd-Frank-Act mandated stress tests (something that I picture involving crash dummies, but probably didn’t) and found that in three different hypothetical recessions, the 23 biggest banks would still hang on to double their minimum requirements in cash.

Says Fed Vice Chairman for Supervision Randal Quarles, “Over the past year, the Federal Reserve has run three stress tests with several different hypothetical recessions and all have confirmed that the banking system is strongly positioned to support the ongoing recovery.”
(Crash test dummies, just because I can.) 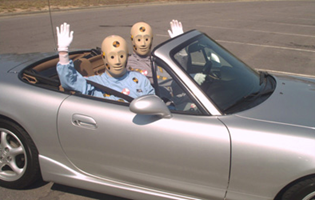 Strong financials and breakneck buying in the bank sector set the pace for Tim’s pick — Republic First Bancorp Inc (NASDAQ: FRBK), a little $3 bank stock based in Philly. It has about $500B in cash and was named Forbes’ “America’s #1 Bank for Service” in 2020, and primarily handles single-family loans and a little commercial real estate.

It’s up 1% year-over year-and, according to Tim, undervalued. 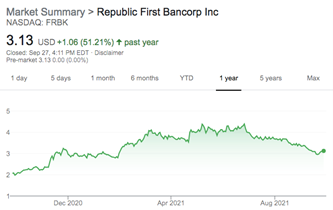 “The bank is in good condition and the loan portfolio in good shape. It’s trading at about 60% of tangible book value,” Tim said. “It should be trading at book value or higher.”

So this is a good buy-and-hold play in any case – but in Tim’s view, it’s going to head north sooner rather than later. Vernon Hill, the elderly chairman, is due to retire soon, and needs to sell the bank to a bigger buyer before that happens.

“Vernon Hill is old,” Tim said bluntly. “He has dressed up and sold stocks before. He needs to sell this bank at 2x the current stock price before he retires.”

“This bank has too much money in cash, and it needs to be sold,” Tim said. “All the guys on the board are in their 70s, and they all own a lot of stock. This will be a pretty big payday for them.”

“Who’s going to buy it?” I asked. (I’m an irritating interviewer. It is one of my gifts.)

Tim listed off a couple of potential buyers in the area: Citizens Financial Group Inc (NYSE: CFG) and BankUnited Inc (NYSE: BKU). (One thing I’ve come to learn over the years is that Tim can smell sharks that smell blood in the water.)

What I really wanted to know, though, is when the sharks were going to bite – and Tim wasn’t touching that question.

That is our profit timeline for today’s trade, ladies and gentlemen: “The guy is old. It has to happen soon.”

But there’s no question about the money-doubling potential.

“This is worth north of $5 a share,” Tim said. “There’s a lot of upside and very little downside.”

This isn’t even as risky as nickel slots. It’s hardly even slots. This is one of those kiddie carnival games where you buy a ticket and you’re pretty likely to win a prize.

FRBK does have some options, but they’re not very liquid. You could pick up the December 17 calls (FRBK211217C00005000), but that would be purely on your own recognizance.

As a bonus strategy, if you will, you can also buy the Pac-Man that eats the smaller banks. “I think of these faster-growing banks as almost being private equity funds that buy banks because that’s pretty much the result,” Tim says. “They buy underperforming smaller banks, improve their performance and that drives the stock price of the combined bank higher.”

He buys these banks at single-digit PE ratios and rebalances his portfolio once a year. It’s not exciting, but according to him, it’s “wildly profitable.”

After writing this, I’m somehow simultaneously hungry for whiskey, steak, AND candy corns. Vernon Hill may be headed for retirement at about the same rate that I am headed for the grocery store.

I’ll be back tomorrow with a weird, mysterious (and fast-moving) oil pattern from Mark Sebastian.

"275% in one day with $250 investment. I'm regaining the losses I made this year thanks to Mark!" — Daniel Bryant
Mark Sebastian, Profit Revolution

"The gratitude I have right now is overflowing, for the first time in 10 years I feel a sense of safety and security knowing with the help from Profit Revolution I can have a second income without adding more hours of work to my day and taking precious time away from my little family. Words cannot describe how I am feeling in the moment. I just want to say thanks for your sharing your knowledge and talents. Thank you." — Teresa Turner
Mark Sebastian, Profit Revolution

"This service allows me opportunity to do other things besides endless hours of research, knowing I have a professional doing the homework and making recommendations which are making me money! Cuts my time into a fraction of what I was spending before!" — Ellis Burroughs
Mark Sebastian, Profit Revolution

"I made 111% in five days on an $88 investment. This service has helped me built more confidence in my trading strategy by defining the process and philosophy." — Sensei Candello