Liz here from swinging London! (Well, not actually. The closest I seem to be able to get is a murder mystery brunch for my bachelorette party. Welcome to adulthood, we’ve got fun and games.)

When Mark Sebastian sent me his Mark Monday trade, though, and I saw British telecom Vodafone Group Plc (NASDAQ: VOD), I was immediately transported back to my one and only visit to London years ago, where a cabbie (driving, obviously, on the right side) explained “television licenses” to me. Apparently, you pay a recurring fee to own a television, and as a result, you don’t have any commercials.

I was young and thought this was brilliant, and then I looked up at the front of the car and saw no one in the “driver’s seat” and had a heart attack for a hot minute.

That wasn’t Sexy Fish, though. Sexy Fish is a bizarre seafood restaurant in (I believe) Mayfair. My memory of the evening is a little hazy. The account executives we were with took us there to eat individual bento boxes for the price of monthly rent in the Corn Belt.

The most uncomfortable part of Sexy Fish was the menu, which involved fish in what I can only describe as pornographic poses. (I apologize to Andrea if the word “pornographic” pings our spam filter.) There were also tiny, heavy brass chopstick holders in the shape of provocative fish – I had to fight a recurring urge to slip one into my purse.

The account executives then bought a lot of wine bottles for the price of 1-acre lots in the Corn Belt. (This is the point where my memory becomes hazy.)

ANYWAY, if you happen to have spent an obscene amount of money in Swinging London, Mark thinks you can recoup some losses and make 200% on VOD by January.

Here’s a shot of VOD for you…

Footsie Up, VOD Down, What’s Up with That?

I present to you two contrasting charts – the first is the London Financial Times stock exchange, containing the 100 highest market-cap stocks on the LSE. It’s sort of like the British version of the S&P, but informally called (I kid you not) the “Footsie.” (I love my job.) The Footsie is up over the past 6 months, emphatically.

For that matter, the broader telecom industry is up too – with 5G rollouts and infrastructure upgrades worldwide contributing to a projected 5.4% CAGR. (The industry itself is expected to crest $257 trillion in the next seven years, which would pay for at least three rounds of drinks at Sexy Fish.)

In stark contrast to that rosy picture, we have VOD, the lone straggler, bleeding 17% over the past 6 months. Well, not really all alone. AT&T (NYSE:T), its America twin flame, is down too. I’m curious whether Mark’s magic spyware shows shorts unwinding in that one, as well (stay tuned). 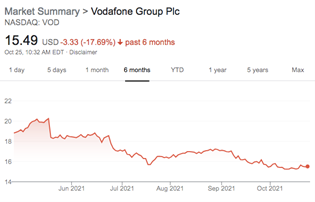 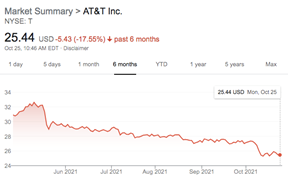 VOD – a massive, global mobile network company serving 270 million wireless customers – has a low P/E (13%) and brings in a high dividend (around 7%).

Because this is Britain and they’re classy, I’ll just talk about all this money in euros. A euro is worth 1.16 USD, so feel free to do the math yourself (you knew third grade would come in handy someday, just like they always told you).

Unfortunately for VOD, they’re up to their ears in debt at the moment, with €41B in debt as of last November, up from just €27B the year prior. (They’re only worth about €41B at the moment, so they’re basically living paycheck to paycheck – solidarity, my friends.)

But they’ve got a lot going for them, as well. They just signed a €18.4B merger deal with Liberty Global, buying up massive amounts of cable TV infrastructure in Eastern Europe. According to Simon Murray, principal analyst at Digital TV Research, this will make VOD “the second-largest multi-national pay TV operator in the world by 2024, with 22.5 million pay TV subscribers behind AT&T.”

Having just switched all my cable over to my new house and received an installation bill only slightly less obscene than the Sexy Fish menu, I fully see the profit opportunity here…

In the words of Winnie the Pooh, “I think the bees suspect something.” Zacks just upgraded VOD to “hold,” and a number of analysts have stated or re-stated “overweight” or “outperform” rankings.

And Mark’s mysterious insider buyers have just started unwinding their shorts (also something that sounds likely to happen at Sexy Fish)….

I sometimes wonder if, without knowing it, deep into the evening, I did steal one of the brass fish chopstick holders. Maybe it’s down in the bottom of some purse I took to London, the detritus of a strange evening, and someday I’ll unearth it and start questioning everything about my life.

I could ask the account execs we had dinner with, but they too seem to have mysteriously disappeared. I actually had to Google the restaurant itself the other day to make sure I hadn’t hallucinated it.

Mark’s mysterious traders seem to be questioning things, too. “Traders have bought about 8,700 April $17 calls,” he said, sending me this picture.

And then he explained what was going on:

“They are starting to unwind their short. Buying is going to put on upside pressure and the stock’s going to rally. These guys will profit at both ends – getting in and getting out. Genius, right?”

Oh, and incidentally, there’s a golden cross going on, too: the 50-day MA just crossed the 200-day. Always a positive sign. (I like it when we get a technically-oriented “depth” signal to confirm a “flex” signal like a big insider buy.)

Mark wants us to buy a different set of calls to take advantage of the aforementioned unwinding and upside pressure. This is an incredible cheap, Nickel Slots call.

I may not remember some things about my life, but I’ll remember that.

Now that I’ve opened the Pandora’s box of London memories, more things are starting to resurface. I just had an extremely traumatic flashback of trying to plug things into the wall with an American plug. Put it back, put it back. Close the box.

I’ll be back tomorrow with a brand-new play from CJ, assuming I’m psychologically fit.