Liz here! I’m sure I’m dating myself (sometimes, I’ve been my only option), but remember the Cabbage Patch Kids?

They were these incredibly creepy, bulbous dolls that people lined up to buy in the ’80s. Each one came with its own “adoption certificate” and supposedly grew in a cabbage patch. (I guess no one dates anyone in cabbage world.)

I remember a kid telling me in hushed tones (at a roller rink!) about this other kid she knew who had had her hair chewed off by a Cabbage Patch Kid. It was one of the mechanical ones that ate pretend food, and when it came to the end of the spoon, it just kept on going.

I still have nightmares about those fat cheeks.

ANYWAY, with everyone talking about the all-time highs in the oil patch this week (Brent crude hit $80 per barrel, and Goldman Sachs sees it headed to $90), I just kept seeing this image. So I drew it. 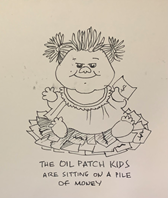 (By the way, AK’s and my dueling USO and OXY puts both ended the day yesterday up over 50%. If you’re making money on those, congratulations to you for listening to me.)

And then I hopped on the phone to talk to Mark Sebastian, and he told me about this peculiar profit pattern he’s been seeing in the oil patch recently. Five or six charts later, and I was a believer.

I was ready to adopt every stock on the list, but he pared it down to one for me – and a trade he sees headed to a 100% win by November.

Oil Patch Oil Patch Whatcha Gonna Do? Grab One of These Pattern Stocks

The ridiculous gains in the OIL PATCH stem from a perfect storm of factors – a faster-than-expected recovery in post-pandemic demand, and at the same time, a severe supply shortage. There’s actually a natural gas shortage right now, which is spilling over into increased demand for oil as backup power. (That reminds me, I need to get a generator for my new house.)

This is the exploding demand for natural gas, by the way. (See what I did there?) Put a pin in that little chart and come back to it because it’ll be useful later. 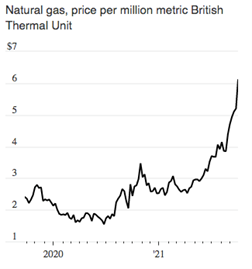 (The last time Mark spotted a pattern anomaly in Trading Today, he handed us two rounds of triple-digit gains, so I’m inclined to listen to him here.)

Mark’s patterns look like depth trader fodder, but they’re actually deceptively fun for flex traders, because there’s not always a good rationale for why they’re doing what they’re doing. They just appear like magic. And make money.

Incidentally, Cabbage Patch kids did the same thing. It cost $40 to “adopt” one in 1985 (complete with birth certificate). Now, they inexplicably sell for up to $2,000. I guess doughy cheeks never really go out of style.

As far as THIS pattern goes, Mark noticed something strange about the behavior of a whole family of stocks in the OIL PATCH relative to oil’s actual price….

“We still see underperformance in all these stocks,” Mark said. “It’s the same pattern over and over again.”

What this means, to him, is that all these stocks still have room to run to let history repeat itself.

Like RIG, which has a lot of rope left compared to July: 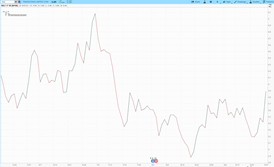 Or one of Garrett’s favorites, ET (Energy Transfer, not “Phone home”): 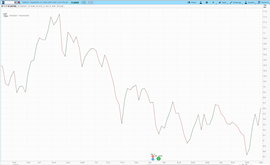 Or OVX, which also crested in July and hasn’t regrouped. 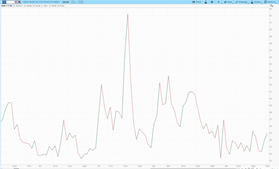 And, of course, like Mark’s actual pick for today – Exxon Mobil Corporation (NYSE: XOM). We’ll get to that in one minute.

“Volatility in oil names is still really cheap, based on VXXLE,” Mark said. (That’s the index from the VIX family that predicts the 30-day volatility of energy ETF XLE.) 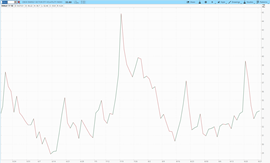 Implied volatility shows whether the fear and uncertainty surrounding a stock is high or low, and it tends to inflate ahead of known catalysts like earnings. On the flip side, the rapid deflation after earnings (called an IV crush) can put options on sale.

When IV is low, that’s when you should buy options. Because no matter if you buy a call or a put, low IV can produce asymmetrical returns.

If you’re interested in reading the full, in-depth report at Profit Takeover, you can get that for free right here.

So, cheap options, a good point to buy, and a batch of stocks that are poised to puff out their cheeks – excuse me, hit their previous highs from July. Which Oil Patch Kid do you pick?

The one with gas, of course. 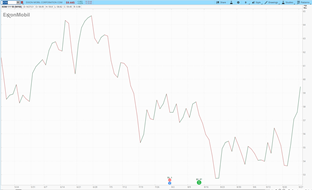 Remember the natural gas chart from earlier? XOM’s the third-largest natural gas producer in the world, and the largest in the U.S., churning out 8.5 billion cubic feet of the stuff last year alone. (That was actually the lowest amount they’d generated in seven years, still putting them ahead of BP’s 7.9 billion.)

Exxon’s failures make more money than most other people’s successes. Must be nice.

After a Q2 earnings beat, XOM is now dipping its toe (I don’t know the right metaphors for gas) into the certified natural gas pool – meaning responsibly sourced natural gas that produces less emissions. They’ve just partnered with a nonprofit called MiQ to get all the gas certified at their Poker Lake, NM, facility, making it available to consumers by the end of the year.

According to Natural Gas Intel, “The company also is considering expanding certification to include other Permian fields and shale production areas, including in Appalachia and the Haynesville Shale.” 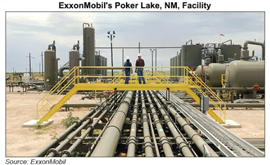 “Green gas” (which sounds only a shade less disgusting than mustard gas) is big business, with certified “responsibly produced” gas expected to fetch up to 5% above current market prices.

That’s obviously nice for XOM, and by extension, for us.

Goldman Sachs sees XOM up 24% over the next year – and Mark sees November calls headed to 100%, if XOM retakes its July highs of $65. “Could do even better than that if volatility goes up,” he said.

I hesitated with how to class this play – it’s not really expensive, but it’s also not hedged. I’m going to go with Dollar Slots, but it has a cheap feeling to it.

Let me know how the adoption works out. Either you’ll end up with $2,000 down the road, or you’ll be eaten alive by a $2,000 doll. Past performance is not indicative of future results.

Speaking of oil – as a first-time homebuyer, I’m now the proud owner of a giant oil tank in my basement, lurking in the laundry room like a trapped zeppelin. There’s a number on it that I have to call before the winter to figure out how it all works.

I haven’t called yet. Maybe I should.

I’ll be back tomorrow with a brand-new play from Andrew Keene – same time, same place. Maybe I’ll even get you a sneak peek before then. You never know.