Liz here, always ready to wade into a good fight (I once watered the neighbor lady instead of her garden, so I have street cred).

Back when my first husband (God rest his soul) was on chemo, he derived a lot of pleasure from mainlining episodes of a YouTube series called “Epic Rap Battles of History,” featuring, as a small sample, “Sigmund Freud vs. Mother Teresa,” “Elon Musk vs. Nikola Tesla,” and “Ronald McDonald vs. Burger King.”

After scintillating lyrics such as “An exception to my theory! I can’t believe this! / Here we have a Mother that no one wants to sleep with” (from Freud. vs. Mother Teresa) – the videos always ended with someone roaring the outro:

Well, I’ve decided – who wins the epic battle between Garrett and AK, that is.

One of the cool – and sometimes baffling – things about writing this column is that I get to talk to so many of the industry’s best trading experts and get their informed takes on various plays. And sometimes, well, they’re just at odds with each other.

And AK just rapped back at him with a long trade on Melco Resorts & Entertainment Ltd (NASDAQ: MLCO), which pretty much wrote the book on “Macau exposure.”

I’m not going to write any actual lyrics for this, but I will give you a shot at a 100% gain, according to AK.

Some people started new hobbies during Covid (I know one lady who was physically pushed out of her apartment by her army of succulents), but I just kinda locked myself inside and did a lot of trading research.

Well, ok, and baked biscuits. I made a lot of Covid biscuits this year. They’re better than they sound.

In between biscuits, I came to the conclusion that there are two main types of traders out there: flex and depth.

Flex traders are very motivated by fast results. Their brains light up from quick-moving trade signals and rewards, and they don’t care quite so much about the “why” behind it all.

Depth traders are more motivated by processes. They feel especially rewarded by delving into research-heavy systems and learning the techniques “behind the curtain.”

Both styles of trading are equally valid and valuable – and most of us aren’t exclusively one or the other.

Personally, I have a mix of trading styles that leans more towards flex, but when I have some extra time, I like delving into the depth side and learning about what makes my favorite moneymaking methods tick.

Garrett – with his deep supply-chain knowledge and “commodities nerd” cred – is one of the purest depth traders I’ve ever known. He can explain, in incredibly logical and minute detail, how a butterfly flapping its wings in Russia can lead to a bottleneck in corn prices in Kansas, and how to make money off the whole thing.

That’s exactly what he did in his Macau story a few days ago – leading us, through a compelling macro setup, to November puts on Wynn.

AK, on the other hand (like me!) is more of a mix of depth and flex. He built and set up this incredibly complex and detailed scanner that scours the markets for big-money bets, which he calls “unusual options activity.”

AK’s S.C.A.N. system spots this unusual options activity, checks that the volume is larger than the open interest, and then “confirms the signal” with a fascinating indicator called the Ichimoku cloud.

AK’s a “work smarter, not harder” person. That’s why he notoriously takes Fridays off (it is IMPOSSIBLE to get him to do anything on Friday. I have tried).

As a “depth first, flex later” trader, all AK has to do NOW is sit there and watch signals roll in on his scanner. Quick hits, big money.

(He’s also just added three cool bonuses to the 1450 Club that make it well worth checking out:)

A quick scanner signal is exactly what tipped AK off to his own Macau exposure trade.

He wasn’t concerned with the Evergrande default, or with China’s government regulation spilling over into the wider casino industry.

All that mattered – to his S.C.A.N. system – was that he saw a big block of unusual options activity moving into Melco, an Asian and European resort company whose ADR trades on the NASDAQ.

“An ‘inside’ trader bought HUGE Calls in MLCO and this is a reopening, and it looks like the stock has bottomed at $10,” AK said. 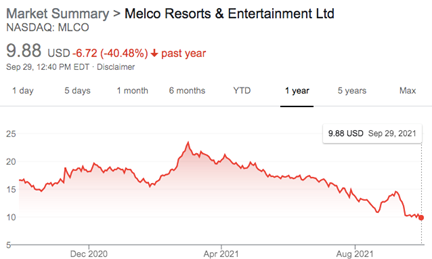 I’ll get to the actual “action to take” in a minute. (If you can’t decipher it from the scanner signal, AK’s new 1450 Club trainer is here to help!)

You can make 100% on a fast-moving flex trade based on a short-term scanner signal.

The real winner of this epic rap battle, in other words, is you.

(I weaseled my way out of that one nicely, didn’t I? It’s called parenting.)

AK’s calls on MLCO are cheap enough to classify for Nickel Slots, even without a hedge. AK sees them hitting $1.60 in the next few weeks, which would hand you a nearly 100% gain.

You can use the money to buy even more succulents if you want to, MELISSA. I won’t judge.

If you’re a die-hard flex trader, take note – AK gets hundreds of these S.C.A.N. signals per week that he doesn’t even have time to act on.

“Keeping up with my scanner, which searches through around 6.2 billion trades each day looking for Big Bet Options, can be overwhelming,” he says. “In other words, I completely overlook a good 90+% of my scanner’s trades — and all that moneymaking potential gets flushed down the drain forever!”

So he’s decided that instead of letting all these daily S.C.A.N. opportunities disappear forever…

He’ll give you full access to this data and share 2X the daily profit opportunity with you at no extra charge.

For the first time ever, you’ll get full access during market hours to the proprietary scanner data that makes up the cornerstone of A.K.’s entire S.C.A.N. system. Here are the details.

And if depth trading is more your cup of tea – tomorrow is Money Calendar Friday and Tom Gentile has an all-new, historical play on a big, liquid ETF just for you.

I SAID I wouldn’t rap, but as it turns out, I find myself unable to resist.

If you want to learn how to flex trade, you can check out this PDF,
But if you like to depth trade, wait for tomorrow and Tom’s liquid ETF.

Yeah I shouldn’t have done that. Oh well.