Liz here, with a brand-new headshot! I hope you like it!

This WAS going to be “Mark Monday” – but I’ve unceremoniously bumped Mark to Tuesday because I have to send you a very important, money-doubling play on garbage.

I noticed something life-changing in the trash over the weekend. In a series of trash stocks, that is. Just call me Oscar.

Go here right now to get it.

Set Up Some Nickel Slots on The Growing Trash Pile

This will be a bit of a rollercoaster, so bear with me.

It all started yesterday afternoon, when our family took a ride over to the storage unit to get out our Christmas trappings. (We forgot our access code and kind of had to break in, but that is not the subject of this story.)

Upon breaking and entering, ahem, unlocking the unit, we found so much wrapping paper left over from last year. Rolls upon rolls upon rolls.

This is all going STRAIGHT into the landfill after Christmas, I thought, uncaringly.

Actually, let me backtrack. This FIRST started last week when my husband kindly sent me a little stop-motion video entitled, “How My Wife Thinks The Trash Gets Out of the House.” It showed the bag of trash hopping out of the kitchen trash can, tying itself closed, and then jerkily exiting the back door all by itself. Point taken, HUSBAND.

Anyway, I had already been thinking about the trash supply chain a bit, in the back of my mind, and then I found myself reading an interview with Guy Davis, the founder of a brand-new ETF called Genuine Investors ETF (GCIG), launched December 1. They’re sort of a Tim Melvin-esque outfit, eschewing meme stocks in favor of long-term fundamental value. (I’m hoping to send a Tim play your way later this week, by the way.)

Guy Davis is, interestingly, hot on trash (this is surely the place to say DUMPSTER FIRE!). One of the 23 stocks in GCIG, Canadian waste management firm GFL, went public in March 2020 and has since risen about 120%. Guy picked them because, in his words, waste is a “terribly unsexy” but “very solid” industry with incredibly stable returns…

While the broader Zacks Business Services sector has declined 17.3% the past year, their Waste Removal Services sector is up over 12%. And in general, the global waste management market size which was sitting at an already staggering $394B in 2020, is expected to hit $715B by 2030, a CAGR of 6.1%.

(Source – Waste Advantage Magazine, a publication I will likely not be subscribing to anytime soon. I find myself wondering whether they print hard copies of this just to increase the overall trash level. Pump and dump, but for dumps. OK, I’m done)

Basically, you should just buy and hold trash (like on Hoarders).

That’s actually Nickel Slots for today. Buy and hold trash. Here’s what to do:

There are really no liquid options on this stock, so just pick up the stock and hang on.

But – like Oscar the Grouch – I want more trash. Don’t you?

At some point over the weekend, I started wondering if you could squeeze extra money out of the trash industry at certain times of the year. For instance, Christmas.

That beautiful time of year when we are all making more trash, with our rolls upon rolls of wrapping paper and ridiculous layers of plastic packaging with the little zip ties that they tie the toys in as though it were a hostage situation, because HEAVEN FORBID we’re able to actually get the remote control car out of the package before the kid starts screaming…. Sorry, I got a bit sidetracked there.

America actually generates – and this is interesting – 25% more waste during the Thanksgiving to New Year’s time period than any other time of year. That’s 25 million tons of extra garbage, all during a yearly three-month period….

And (at some point early this morning) that’s when the lightbulb went off for me.

I started pulling up large-cap waste management stocks and going through them one by one. And that’s when I saw it…

This Trash Pattern Will Blow Your Garbage Can Lid

In every one of these trash stocks, going back over the past five years (except, of course, for GFL, which hasn’t been public that long)…

Every year, between early November and early January…

All of these stocks have gone up (along, I presume, with the 25 million extra tons of garbage being processed during that time period).

Sometimes it’s just a little bump of one or two percent. Sometimes it’s a big 10 or 25% move. More than enough to juice some options for you every time.

Here are five to get you started (I would mark them up if I could find my highlighter in this pile of trash, but you can go look them up on Google and move the little interactive thingy for yourself and see that I speak truth). 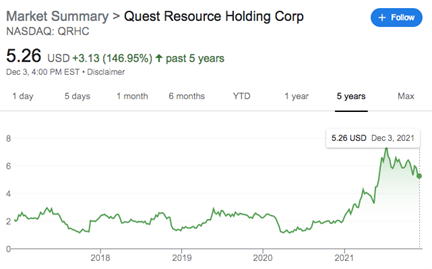 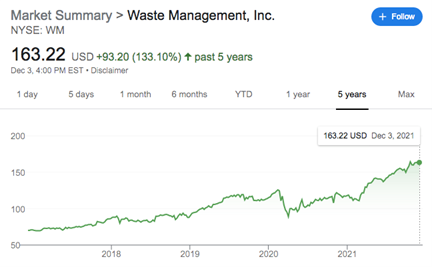 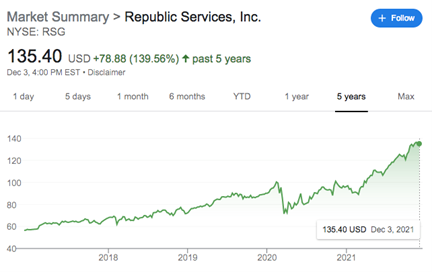 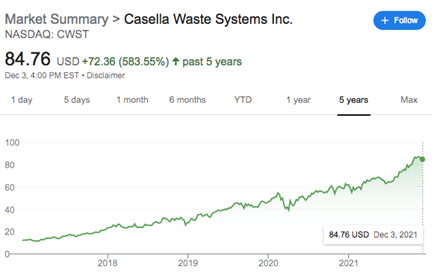 And GFL, our little newbie. 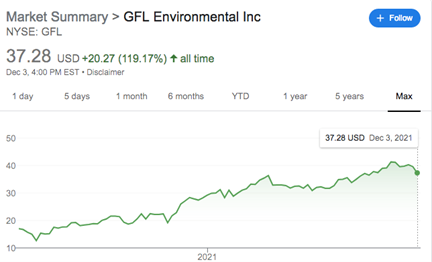 Fortunately for us, we’re still towards the beginning of this year’s trash bump, and we still have the huge pile of Christmas trash left to get through. (My household will be contributing to those statistics, because my child wants a drum set. I can only imagine what swathes of noise-reducing packaging that comes swaddled in.)

So that brings us to Dollar Slots – as you’ve guessed, it’ll be early 2022 options on one of these large garbage stocks. WM, to be precise. (You’ll notice that their trash bump has already begun to build).

WM is a Texas-based trash giant (LONE STAR WASTE!) with the largest network of landfills and recycling facilities in the biz and an illustrious series of recent earnings beats. Zacks rates it a “Hold” and expects 17.1% growth and 20.1% growth for revenue and EPS, respectively.

Not that we care about anything except THE TRASH BUMP…

We’re going to go out to February here to get some nice liquid calls. These are a shade expensive, but that’s why we call them DOLLAR SLOTS. 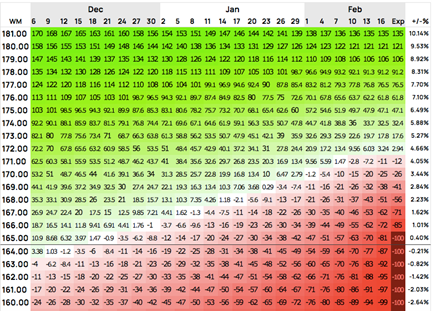 That’s it – that was my great trash revelation of the weekend.

I will now close my garbage can lid and leave you to your own devices. And I’ll see you back here tomorrow with your postponed Mark trade – Mark TUESDAY doesn’t quite have the same ring, but oh, well.

P.S. You can’t have my buffalo meatballs with mozzarella biscuits. 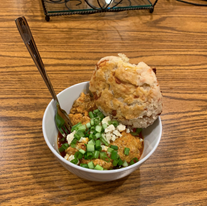