Liz here, headed out the door to get some paperwork filed, no big deal or nothin’.

Today’s mailing is hitting your inbox a little early for that reason. And also because ADM just reported a nice Q3 earnings beat and — thanks, AK! – your November 5 ADM calls are up 80% and climbing. I guess it was a good thing that I went into the office that day.

Let’s sell that position for a profit this morning. Here’s what to do.

On top of that, CJ’s got another clean energy trade for you today, though last week’s is still waiting to take off. Sweet soul that he is, he’s both stubborn and honest. And he made us a serial killer chart! I think I’ll marry him. I’m in a marrying mood today.

“Last week we added our first ‘Clean Energy Season’ trade,” CJ says, “and I’ll be open, it hasn’t traded as well as I had hoped. Bloom Energy shares have declined since opening our trade, but the long run is favorable for this clean energy company.

“This week, I’m adding more exposure to the sector with a company that is preparing to break out of the top of its range – again.”

Here’s that story – plus not two, but three ways to make money…

I’m hoping by the time this hits your inbox these calls will have climbed to 100%, but regardless, you should take home a nice little slice of cake today and put it under your pillow.

And now I’ll let CJ take it away. He sent me a long and brilliant writeup which I won’t spoil with too much meddling.

First Solar, Inc. (NASDAQ: FSLR) shares are trading just below $110 as the stock has seen a consolidation between $100 and $110 that’s lasted about three weeks. 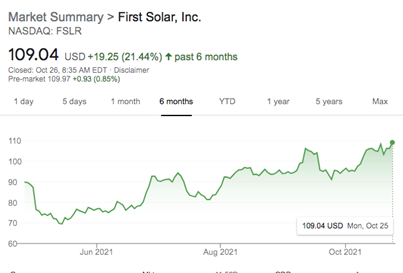 In some cases, traders would think that the stock was getting ready to run lower to its 50-day moving average at $100, but my momentum and breakthrough models are suggesting the opposite, a breakout that could lead to $140 by year’s end.

The reason this trade works is that money is migrating back into the solar technology sector. For the last four weeks I’ve been tracking volume increases in the sector, including names like Ormat Technologies (ORA), Enphase (ENPH) – yes that’s one of Shah’s favorites in the group – and Sunpower (SPWR).

Money is flowing here for a few reasons.

First, this is a seasonal trend as traders are used to hearing a lot about tax credit subsidies this time of year along with talk of Pumpkin Chai Lattes.

Let me be clear – I’m no fan of the latter, pumpkin spice is supposed to be in pies and breads, not coffee and beer. (Note from Liz: I don’t want to marry you after all. Never mind.) But I am a fan of the seasonal trade winds that migrates money into this sector.

Higher tax rates and interest rates are starting to shake the small cap world (the sector these stocks trade within), but these companies are eyeing tax credits as the infrastructure spending bill gets closer to President Biden’s desk. I don’t usually watch the fundamentals, but this is a big one.

Technically, this stock has woken-up from a six-month slumber with shares trading back above their key technical levels, all in bullish trends.

Option activity is seeing some impressive call adds to First Solar that extend well into 2022, suggesting that the options market is raising their price outlooks for this and other clean energy stocks.

Finally, analyst recommendations. The analyst community slashed their expectations and price targets for the clean energy sector in early 2021 as these companies were halved or worse. Now, we’re starting to see upgrades as they play catch-up.

Is that important to you and me? Kinda.

We don’t usually follow analyst recommendations, we lead them. This means that every upgrade will draw other buyers into the stock AFTER we’ve taken our positions. It’s always a good thing to have The Street pushing a stock higher after you’ve bought it, and that’s what we’re aiming to do with First Solar.

And here’s that crazy chart I know you’ve been waiting for….

Liz hopping in again here for a second – “nickel slots” is low risk, in that you’re just buying the stock, but it’s not cheap. And neither are “dollar slots,” which are rather expensive options. It’s like the great cereal heist in which the cereal box price remains the same but the size of the box decreases (also knows as “shrinkflation”).
I mean, actually it’s not like that at all, but I just wanted to seize the moment to use the phrase “great cereal box heist.”

Ahem, ok, back to the trades. CJ’s first recommendation is just buy FSLR. “It’s not a relatively cheap stock compared to many clean energy names, but it’s worth buying at $110 or lower.”

And now, on to Dollar Slots.

“Options traders that want to grab the horns of this clean energy bull should take a look at the January calls,” CJ says. “If you’re an options trader playing the long game with FSLR, consider buying the June calls.”

Here’s those two Actions to Take:

I’ll be back tomorrow with a brand-new Garrett trade, but for now I need to get up the road to the courthouse.