Tightening our Risk Management as Holiday Trading Charges Ahead

Not a member? Sign up for High Velocity Profits

Keith Fitz-Gerald's expertise is in identifying market patterns others don't see and in finding opportunities that are – as of yet – unrecognized. Both can give you a powerful edge.

So when he first spotted the X pattern, Keith could hardly believe the results.

And in his 34 years in the markets as an analyst, consultant, and quantitative trader, he'd never seen anything quite like it.

So he spent six months building a treasure trove of research into winning trades.

Keith Fitz-Gerald's expertise is in identifying market patterns others don't see and in finding opportunities that are – as of yet – unrecognized. Both can give you a powerful edge.

So when he first spotted the X pattern, Keith could hardly believe the results.

And in his 34 years in the markets as an analyst, consultant, and quantitative trader, he'd never seen anything quite like it.

So he spent six months building a treasure trove of research into winning trades.

From the bursting of the dot-com bubble…

And the bull markets in between and after…

Amazingly, throughout all of this immense market turbulence… all 15 years of it…

There was a constant.

One that stayed hidden until very recently.

For the last decade and a half – the last 15 years…

This first X pattern has appeared in two to three of these stocks a month… each and every month.

And during this time…

And then sell when the second X arrived…

You could've been rewarded with a constant stream of high, triple-digit winners.

Keith calls this X pattern “the biggest opportunity I've ever come across.”

That's why he's so excited to share his findings with the public for the very first time with his brand-new High Velocity Profits.

Keith believes this simple pattern will allow you to, with 100% certainty, only buy stocks that are going up.

And those who follow Keith know, when he spots a pattern, the results can be very lucrative:

What you get with a subscription to High Velocity Profits 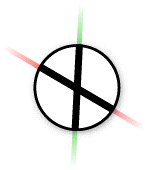 At its core, all you have to do is just grab regular, “boring” shares of stock when you see this X…

And sell them when you see it again.

This is a nine-month stock chart for World Wrestling Entertainment – the $900 million sports media company.

Its ticker is WWE.

In September of 2013, WWE's share price began an aggressive rise.

And the following April of 2014, it started to plummet – eventually landing fairly close to where it began.

But none of that matters.

Because all you need to know are two dates. 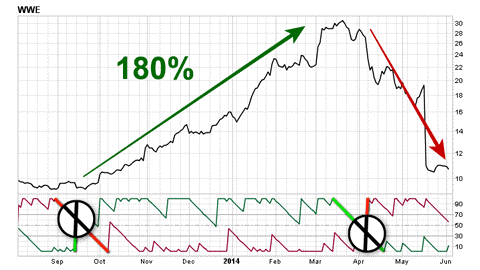 The green line in this chart shot straight up and the red line fell.

As they crossed, they formed an X.

Shortly after, the stock surged 180%.

Another X formed, as the red line shot straight up and the green line fell.

And look what happened next – WWE dropped like a ton of bricks.

However, if you had simply bought this stock at the first X…

And sold when you saw the second X…

Your reward would've been a 180% windfall in about six and a half months.

Let's jump back to 2009, and you'll see this same story play out with Netflix. 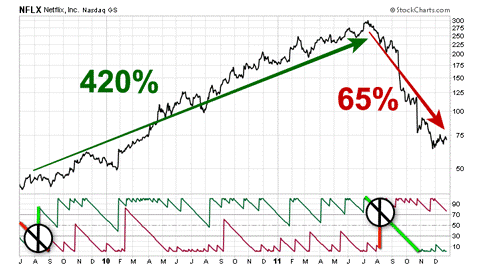 On August 7, the green line shot straight up, as the red line dramatically fell.

The first X was formed.

And then, almost two years later to the day…

As they crossed, the second X appeared.

And over the months that followed, Netflix's stock crashed 65%, wiping out the majority of the gains.

From boosts in subscriber counts and increased revenues, to overhype and rising costs of securing content – there was no shortage of factors driving Netflix's wild ride.

But none of this matters.

Because, by grabbing shares of Netflix when you saw that first X – and selling at the second X…

That 420% winner would've been yours for the taking.

Let's rewind back even further to the year 2000. 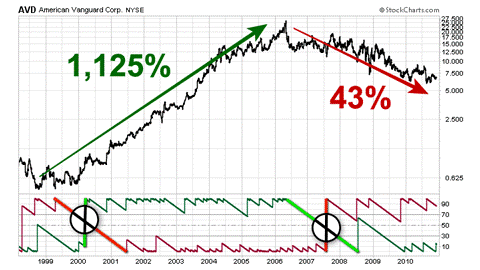 That green line shooting straight up as the red line falls.

And there's the first X.

At the time, American Vanguard's stock was trading for $1 a share.

From a major deal with DuPont, to a series of consecutive jumps in net income…

Somebody looking back could've provided a long list of reasons for American Vanguard's multi-year rise.

None of them matter.

Because, before any of these things came to pass, that first X had appeared.

And if you had bought all the shares you could get your hands on when it did… then sold them when that second X arrived… you would've pocketed that 1,125%.

And you would've been free and clear when, shortly after, American Vanguard's stock dropped 43% to only $7 a share.

These three examples dating from today all the way back to the millennium represent a quick snapshot of something amazing Keith Fitz-Gerald has uncovered.

It's going to change how you see the markets – and how you invest from this day forward.

It will first appear in two to three stocks a month, every single month.

Shortly after that X forms, oftentimes within 24 to 48 hours – the stock shoots up.

And as the charts show, there's a second X pattern.

Focus on what happens after it appears…

The stock begins to pull back.

By nailing this time frame…

More importantly, you would've had the opportunity to take part in some of the biggest windfalls in recent history, like:

As incredible as this X pattern is on its own... it's not the ultimate answer.

When it first appears in high-caliber stocks, those stocks quickly enter into a state of high velocity – unleashing an unstoppable explosion of profits.

To identify a high-caliber stock required another unique discovery from Keith, one that's just as simple as the first.

It's called the F-Score – an incredibly precise metric for uncovering public companies whose share prices are susceptible to enormous profit spikes.

By combining these two, you'll have the opportunity to:

And it took Keith – a former member of the Wall Street fraternity – to uncover this powerful new pattern.

This remarkable discovery is at the heart of his brand-new High Velocity Profits, now available to the public for the very first time.

Here's what you need to understand...

We've all looked at stocks in the past that we wanted to buy.

We were ready to pull the trigger and grab shares, but we hesitated…

Because these stocks were already “going up.”

So we asked ourselves…

Did I just miss the boat?

If you see that first X, the answer is a resounding…

You absolutely… positively… did NOT miss the boat.

In fact, the real profit explosion is about to begin… because these stocks have reached a state of high velocity.

It's been the same story for the last 15 years with many penny stocks… with small-cap, medium-cap, and even large-cap stocks…

These Xs have delivered quick-hit payouts… these Xs have produced long-term winners… and this same X pattern has appeared alongside the biggest windfalls of the last 15 years.

That's why we believe this pattern will, with 100% certainty, allow you to…

“Only buy stocks that are going up!” 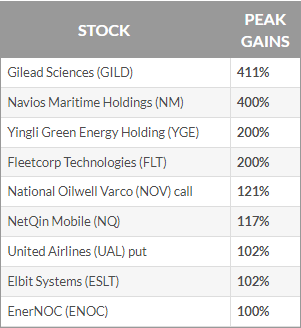 What you get with a subscription to High Velocity Profits 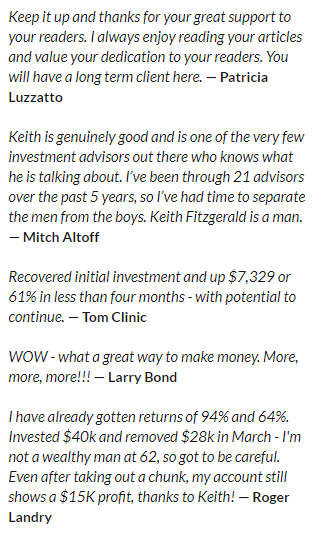