Liz here, marching to the beat of my own strange little drum. I remember being around 4 years old, telling myself a very loud, long, involved story where the villain was sliced up into sausage meat. My poor mother, overhearing this, was horrified. (Now that I have a 4-year-old, I get it.)

I tried to explain that it was ok because he was the villain, but it didn’t seem to help the situation.

And when everyone else is following earnings, he’s buying itsy-bitsy, teeny-weeny, yellow polka dot…banks.

Now, don’t get me wrong – the next 30 days are all about earnings. It’s the most lucrative month of the year, if you play it right. You should be watching Money Morning LIVE religiously every morning – and if you haven’t joined Kenny Glick’s brand-new Warlock’s War Room yet, DO THAT. You’ll be getting…

You can get all the details of the Warlock’s War Room right here.

But if you’d like to look past the next 30 days, and try something entirely different this afternoon – you might want to check out what Tim calls his “Trade of the Decade.”

How the “Trade of the Decade” Works And What It Is

My kid, who’s into the Beach Boys, walks around the house a lot bellowing “WE’LL GET THERE FAST AND THEN WE’LL TAKE IT SLOW.” That’s Tim.

Tim will talk your ear off about small-bank stocks, so I’m just going to let him have his head. (I feel that there’s a few metaphors in there somewhere about being sliced up into sausage meat, but I digress.)

The truth is that the ability to own illiquid small stocks is one of the most significant advantages small investors have in the markets.

No high-frequency traders of hedge funds will be buying these stocks anytime soon. Traders will not be whipping the share price around every three months when the quarterly report is issued. (Shots fired, earnings peeps! Sorry, that was Liz.)

These small banks can offer investors a huge opportunity. Some of them will be able to compete successfully against larger competitors and see solid earnings and book value growth that drives the stock price higher. Some will engage in a merger of equals to compete and grow.

Some will be taken over at a premium to book value as the best way to improve earnings right now in banking is to buy another bank. (That was the premise behind Tim’s last “takeover trade” here in Trading Today.)

They might not all work, but owning a portfolio of banks that trade for less than asset value with reasonable balance sheets and loan portfolios or have a solid turnaround plan in place is a sound strategy that has helped many investors build wealth in the past.

With bank assets still very cheap right now, it is not unreasonable to expect the same (if not better) results over the next decade. A host of demographic, social and economic trends have converged to create an extraordinary opportunity in some bank stocks.

Tim calls that opportunity the Trade of the Decade.

The first group of banks that make up a “Trade of the Decade” portfolio (Tim says) are sleepy little banks that no one really notices. They have solid loan portfolios, an ad­equate or even excess amount of capital, and the shares still trade below tangible book value. They are not making headlines and they won’t be the subject of cocktail-party chatter unless you happen to live in their hometown and have an account with them.

Tim says, “Until the day they get taken over, they probably won’t be the short-term performance leader, but my experience has been that if bought right, these stocks will almost always be among your top long-term performers.”

The core of a Trade of the Decade portfolio is made up of, in Tim’s words, pretty boring little stocks.

“They will move like bunny rabbits over time, trading in a tight range before leaping ahead on good news or possible takeover offers,” he says. “Patience pays with these stocks, but the small-bank stocks have the potential to be the best investment of your lifetime.”

I have to insert an observation of my own here (this is Liz): When Tim writes, he divides up all his paragraphs into exactly four lines. It is uncanny. I don’t know if it’s clinical OCD or just an innate drive to be symmetrical.

Very occasionally, Tim will throw out a one-line paragraph. When he does, I always sit up and take notice because it’s so out of the ordinary.

This was Tim’s one-liner for today:

Liquidity is not that important to a long-term investor. Value is.

And that, in a nutshell, is why these teeny-tiny, itsy-bitsy bank stocks are so worth buying.

3 Boring, Teeny-Weeny Stocks to Add to Your “Trade of the Decade” Portfolio

That means you now have the start of a longer-term “Trade of the Decade” nest egg.

Tim sent me a brand-new bank for today, and I also reached back into an earlier email he sent me (all neatly divided into four-line paragraphs) and added in two more of his favorites….bringing your total number of Tim trades to four. (I cannot get away from the number four today….and this paragraph now has four lines, too.)

ANYWAY, that means – while earnings rise and fall, and we grab massive short-term gains from AK, Mark, and Kenny….

Tim’s boring little banks will be sitting here getting fatter and fatter over the next decade.

Every now and then, we’ll add another one so the pot gets bigger.

Right now, just so you know, I’m working with the web developer people to build a working, easy-to-navigate portfolio with searchable categories. (Thanks, Chris!) And I’m thinking I may include a third category beyond Nickel and Dollar slots.

So, without further ado, here’s 3 fast “actions to take” that’ll pay off slow in the next decade.

I was going to throw in another one of Tim’s favorites — Community Savings Bank (CCSB) – but it’s already been bought out and gone up 25% in the couple of years since he first mentioned it. As you can see, it doesn’t always take a decade.

(NECB, the new one Tim sent me, is up 56% over the past five years, for instance. Be encouraged.) 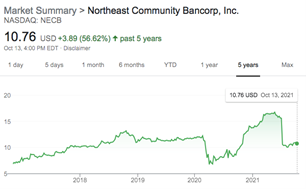 I’m off to school pickup in just a bit. Looking forward to hearing the discrepancy in Mr. 4’s account of his day and his teacher’s. The other day he told me “I kicked Oliver in the face and killed him,” while Miss Erica said, “Mr. 4 had a good day today. He played a little with the other children instead of just wandering around the yard picking up sticks.”

Here’s to the next generation of strange little children. May they thrive, and over the next decade or so, prosper.

Tomorrow is Money Calendar Friday and we’ll be back to regularly scheduled programming with a big, fast gainer on a liquid ETF.